From Ife Central Local Government Area (LGA) of Osun State, the cradle of the Yoruba race, to Iwo, the story was the same. The tell-tale signs of infrastructural rot were evident. Even in Ifelodun, Olorunda and Ayedaade LGAs, the story was not different either. The bad roads, dearth of social amenities amongst others were pointers that Osun State, like a majority of states in Nigeria, has also been battered by corruption.

Thus, Osun people, smarting from the ravage of corruption, welcomed the Independent Corrupt Practices and Other Related Offences Commission (ICPC), with a litany of complaints when it came to town with the Citizens Engagement Forum (CEF).

CEF is a platform designed by ICPC to sensitise the grassroots on and against corruption. It is aimed at inculcating the virtues of integrity, accountability and transparency in the citizenry as well as enlisting ordinary  people in the fight against corruption.

Over 2,054 people attended the programme held across five local government areas of the state. Participating groups included traditional rulers led by the Ooni of Ife, His Majesty Oba Adeyeye Enitan Ogunwusi, council chairmen, councilors as well as heads of Community Development Centres and students from both private and public schools.

Leaders and members of faith-based organisations showed a strong presence and even members of Civil Society Groups were not left out in the support for the crusade against corruption.

In his welcome address in Ife Central, the Acting Chairman of ICPC, Dr. Musa Usman Abubakar, noted that corruption does not exist only within the corridors of power, and as such, there was the need for a joint effort by the entire citizenry to fight the problem of corruption in Nigeria.

He said, “It is well known that corruption poses a serious challenge to development in any society. In Nigeria’s public and private sectors, corruption has become endemic and its devastating impact on the nation’s development is felt at all levels.

‘To root out corruption therefore, grassroots participation in governance is necessary for the promotion of accountability and transparency in government activities as well as engender good governance.

‘There is no denying the fact that active interest by the local people in how their funds are used and in how decisions are made by public officials, contributes a great deal to the development of the community and its positive impact on the people’s wellbeing. It is therefore this pivotal role of citizens that ICPC is exploring as a galvanizing force for entrenching integrity in governance and the restoration of values in the society.”

The Ooni, Oba Ogunwusi, who showed great support for the programme said people must rise up against corruption for even development to take place.

The Oba, who was represented by the Waasin of Ilare, His Royal Highness Oba Zacheaus Olasode, added that government alone cannot handle the problem of corruption even as he called on the entire Yoruba nation to kick out corruption from their midst.

All the local government chairmen were in tune with ICPC, as they took turns to speak against the devastating effects of corruption in Nigeria, while pledging to join in the fight against it.

Council Chairman of Ayedaade local government, Hon, Abdullateef Adewale Adeyeye, who spoke at the forum in Gbongan, observed that corruption has the capacity to topple our democracy if allowed to thrive unabated.

According to him “Nigeria must not fail, this democracy must not fail because of corruption. If corruption continues at the present magnitude unabated, I am afraid that it can truncate our fragile democracy and I pray that this will not happen.

‘All of us must not stand aloof, all hands must be on deck to fight the menace, we must support the president and fight corruption together to a standstill in Nigeria.”

Speaking in like manner, the Chairman of Ifelodun Local Government Council, Hon. Lamidi Omoloye, stressed that we cannot attain a cultured society without getting rid of corruption.

His words; “There is no gainsaying the fact that corruption has eaten deep into the marrows of our society and the time has come to nip this ugly monster in the bud. It is therefore our collective responsibility to ensure that all forms of corruption in our society are prevented.

Hon. Omoloye also called on students and market women to shun all forms of corruption such as examination malpractices and other dubious practices in schools and market places.

On her part, the Director, Public Enlightenment and Spokesperson of ICPC, Mrs. Rasheedat Adunni Okoduwa, mni, who anchored the CEF maintained that there cannot be meaningful development anywhere corruption thrives because it is the antithesis of development.

She called on Nigerians to rise to the challenge of wiping out corruption, adding that a corruption-free Nigeria will deliver the Nigeria of our dreams where citizens have the opportunity to achieve their potentials, youths would gain employment, qualitative health facilities would be available and there would be functional educational systems.

She said, “To wage a successful war against corruption, citizen participation is therefore essential. The people must be interested in governance to demand accountability and transparency in government activities. Public officials wield power on behalf of the people, consequently they should be held accountable for their decisions and actions in office. This is one way to check impunity and pave the way for enhanced development.

‘With the alias of Ípinle Omoluabi’, we believe that all the good people of Osun State are more than ready to be examples of uprightness and decency in everything that they do. We also believe that everyone here today will make a sincere commitment to make Osun State and Nigeria corruption-free.”

His words, “The earlier we got rid of corruption, the better for us as a nation. Any society where there is development must have taken a strong stance against corruption to bring about such development. We need to do that as a country in order not to destroy our present and the future.” 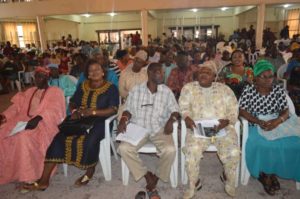