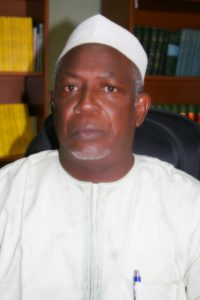 Alhaji Bako Abdullahi was born on the 15th day of October 1945 in Lame, Toro Local Government Area of Bauchi State. He started his Education at Kobi Junior and Senior Primary School in Bauchi between 1953 and 1959 and obtained West African School Certificate at Provincial Secondary School Bauchi in 1960.

He obtained Diploma in Law and Diploma in Islamic Law at the Ahmadu Bello University in 1969 and 1971 respectively. Between 1971 and 1974, he graduated with a Bachelors degree in Law LL.B from the same University.

Alhaji Bako attended the Post Graduate Training in law at the Nigerian Law School Victoria Island Lagos between 1974 and 1975 and was called to the Bar in June 1975.

He has served the Nation in various capacities at the State and Federal levels. From a Pupil State Council in July 1975, he was seconded to the Northern Nigeria Investment Limited as Senior Legal Executive, from November 1979 to December 1980. He returned to the Bauchi State Government as a Senior State Counsel before he set up his own Private Practice from December 1981 – March 1984. In 1984 he was appointed a Member of the Bauchi State Executive Council.

Alhaji Bako Abdullahi attained the peak of his career with the Bauchi State Government in May 22 1985 when he was appointed Attorney – General and Commissioner for Justice. Between October 1985 and December 1999 he went back to Private Legal Practice and was subsequently appointed Legal Adviser, National Maritime Authority, Apapa Lagos. Between October 1999 and September 2003, he served as Director, National Drug Law Enforcement Agency (NDLEA).

Furthermore, Alhaji Bako was a Director on the Board of 7-up Nigeria Limited from July 1986 to October 1990 and also a director with the Nigerian National Shipping Lines Limited (NNSL) between June 1987 and October 1990. He also served as a Member Bauchi State Judicial Service Commission from July 2007 to July 2009, when he was first appointed as a Member Independent Corrupt Practices and Other Related Offences Commission (ICPC) in July 2009. The appointment was renewed for a second term in 2014.

Alhaji Bako is married and blessed with seven children. He has travelled widely throughout the world and visited Countries like Germany, United States of America, England, Thailand, Holland, Sri Lanka, Austria, Ghana and Saudi Arabia.