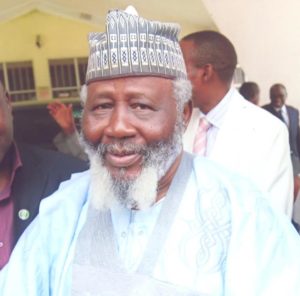 Hon. Justice Mohammed Mustapha Adebayo Akanbi was born on 11th September 1932 at Accra, Ghana, to Muslim parents from Ilorin, Kwara State. After completing secondary school he worked as an executive officer in the Ghana Civil Service. He was also active as a trade unionist. Moving to Nigeria, he worked in the school Broadcasting Department of the Ministry of Education.

Mustapha Akanbi obtained a scholarship to study law at the Institute of Administration, now Ahmadu Bello University Zaria, followed by legal studies in the United Kingdom. He was called to the English Bar in 1963, and was called to the Nigerian Bar in January 1964. He joined the Ministry of Justice and became a Senior State Counsel in 1968. In 1969 he set up in private practice in Kano. In 1974 he was appointed a judge of the Federal Revenue Court, and in January 1977 he was elevated to the Court of Appeal Bench. In 1992 he was made President of the Nigeria Court of Appeal, a position he held until his voluntary retirement in 1999.

In 2000, Justice Akanbi was appointed by President Olusegun Obasanjo as pioneer Chairman of the Independent Corrupt Practices and Other Related Offences Commission (ICPC).

Akanbi retired in September 2005 on completion of the first term of office. He joined the board of the Justice and Law Enforcement Reformation Organization, a non-profit organization that aims to eradicate corruption and poverty from the perspective of the Judiciary and Law Enforcement agencies. In 2006, Akanbi established the Mustapha Akanbi Foundation (MAF) in Ilorin Kwara State, dedicated to strengthening civil society groups, government agencies and private business concerns and helping them imbibe a culture of honesty, integrity, transparency and accountability.